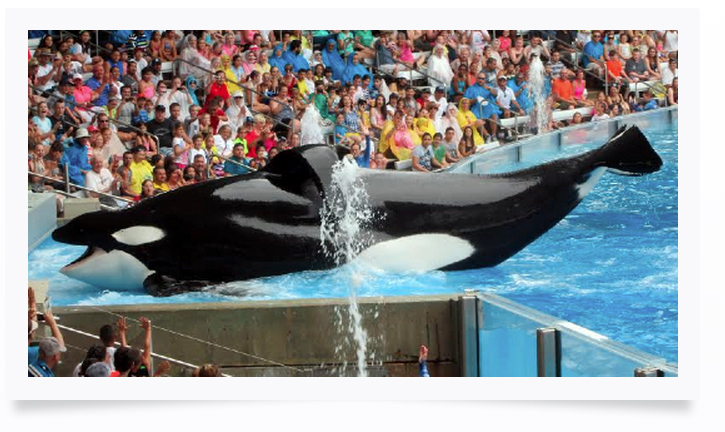 SeaWorld is celebrating its 50th anniversary this year but it also marks another anniversary – 50 years of holding orcas captive for ‘entertainment’ purposes.

Orcas live in tight family groups who usually stay together for life. SeaWorld ripped many of these wild families apart in the 60s and 70s. Although they don’t capture from the wild anymore, they now breed orcas from as early as 6 years old. In the wild, orcas do not start breeding until they are around 15. Impregnating orcas so young hasresulted in many mothers rejecting their calves or being aggressive towards them and mothers not knowing how to nurse properly which leads to their calves dying within the first few months. Surviving calves often have to be raised by trainers. Without any bond to their mothers, these orcas do not learn how to nurse and cannot bring up their own offspring.

Captivity causes orcas mental distress, as seen in Tilikum (pictured above), who was involved in the death of three humans, and Kasatka, who dragged her trainer Ken Peters under water multiple times in an attempt to drown him in 2006. I do not want to see these beautiful creatures suffer any longer. I also do not want to see another human being die in these theme parks just because the owners of these parks cannot let go of their traumatised star attraction.

WDC, Whale and Dolphin Conservation, a charity I am a supporter of, are backing my calls for British Airways to stop working with SeaWorld. In response to WDC’s recent campaign, Virgin Holidays are looking carefully at their future relationship with the captivity industry. I hope BA will step up to the mark and do the same. We ask BA to stop selling trips to SeaWorld. After 50 years of making millions of dollars profit for SeaWorld’s Shamu Stadium, we want to see a better future for these magnificent, intelligent and socially complex whales.

BA responded positively to WDC’s campaign asking cargo airlines not to transport live whales and dolphins captured in the wild. We hope they will extend their positive response to our wish for an end to the suffering these orcas endure in confinement in the name of ‘entertainment’.

8 thoughts on “Stop selling trips to SeaWorld. End your support for these cruel orca circuses.”