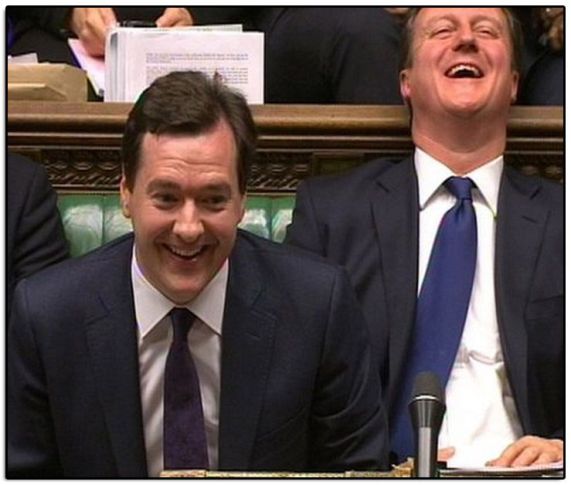 In the UK, the money collected from National Insurance contributions can only be spent on the National Health Service and Benefits.

While the need for food banks continues to grow the Chancellor, George Osborne is sitting on £30 billion pounds.

One of the commonest reasons for people having to go to food banks is benefit delays including sanctions.

Some of the most ridiculous reasons for sanctioning benefits:

A man with heart problems who was on Employment and Support Allowance (ESA) had a heart attack during a work capability assessment. He was then sanctioned for failing to complete the assessment.

A man who got a job that was scheduled to begin in two weeks’ time was sanctioned for not looking for work as he waited for the role to start.

Army veteran Stephen Taylor, 60, whose Jobseeker’s Allowance (JSA) was stopped after he sold poppies in memory of fallen soldiers.

Via the Daily Mirror.

A man had to miss his regular appointment at the job centre to attend his father’s funeral. He was sanctioned even though he told DWP staff in advance.

Ceri Padley, 26, had her benefits sanctioned after she missed an appointment at the jobcentre – because she was at a job interview.

Via the Daily Mail.

A man got sanctioned for missing his slot to sign on – as he was attending a work programme interview. He was then sanctioned as he could not afford to travel for his job search.

Sean Halkyward, 24, said his benefits were sanctioned because he looked for too many jobs in one week.

Via Pontefract and Castleford Express

Mother-of-three Angie Godwin, 27, said her benefits were sanctioned after she applied for a role job centre staff said was beyond her.

Sofya Harrison was sanctioned for attending a job interview and moving her signing-on to another day.

Michael, 54, had his benefits sanctioned for four months for failing to undertake a week’s work experience at a charity shop. The charity shop had told him they didn’t want him there.

Terry Eaton, 58, was sanctioned because he didn’t have the bus fare he needed to attend an appointment with the job centre.